Cristiano Ronaldo has been named the Premier League’s Player of the Month for September for his performances for Manchester United but Gary Lineker, felt he was fortunate to win the award ahead of Mo Salah.

Salah was the obvious top contender for the award after his impressive display for Liverpool. He scored in Liverpool’s three Premier League matches last month, equalling Ronaldo’s tally of three, and arguably contributed more to the Reds around the pitch.

One fan wrote: ‘That’s absolutely farcical, Ronaldo was useless in most matches he played but scored a few tap ins, Salah was far better than him this month.’

While another posted: ‘Ronaldo winning POTM in the month Salah confirmed himself as the best player in the world is the biggest joke of all time. 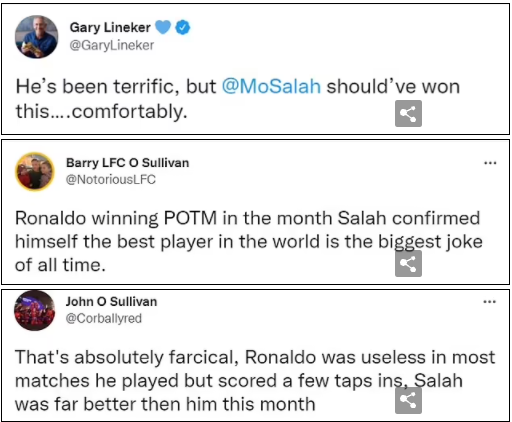 Ronaldo has now claimed the Player of the Month award for the fifth time in his career after making a fine start to his second spell at Old Trafford.

Anthony Joshua knocks out challenger Pulev in 9th round

In a battle for the WBO, IBF, IBO, WBA world heavyweight titles, Anthony Joshua knocked down mandatory challenger Kubrat Pulev four times to secure a knockout in the ninth round. They were initiall
Read More

Al Sadd manager Xavi confirms he has tested positive for COVID19 and will be in self-isolation. The Spain’s World Cup winner will miss his side’s return to competitive action against Al Khor tonigh
Read More

Return of fans to English stadiums on hold

Prime Minister Boris Johnson announced on Tuesday that the planned return of spectators to sports venues in England could be on hold for six months due to a sharp rise in coronavirus cases. A numbe
Read More

News THE BIRTH & ORIGIN OF TEA. THE FLUID OF LIFE. THE DOMINATION OF TEA IN ONDO CENTRAL.

News Buhari off to Abu Dhabi for two-day visit